The traditional pole act consists of a single or multiple poles where the pole has a height of 15-21 feet or 5-6 meters and is guided down with cables. Four-Cubed has a custom built freestanding rig that doesn't require any external rigging. This act differs from the cube act in it's ability to have the performers jump from one pole to the other, and also has vertical drops and slides which adds an element of danger.

Acrobatics poles have been around for many years. Mastered and created by the Chinese for well over 500 years this act has been a traditional part of the circus as well as incorporated into the cirque styles of today. This act will amaze audience as these performers climb, twist, flip and turn on the cube or poles. These acrobats display strength and tremendous focus as they perform this entertaining act. It's fast paced high energy and full of fun. 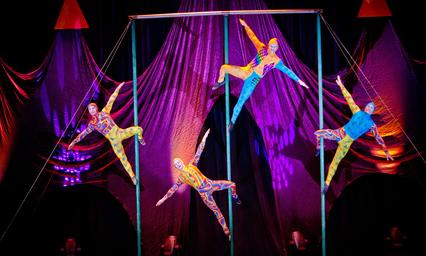 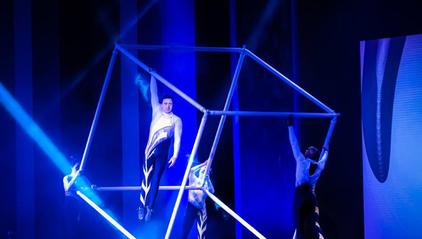 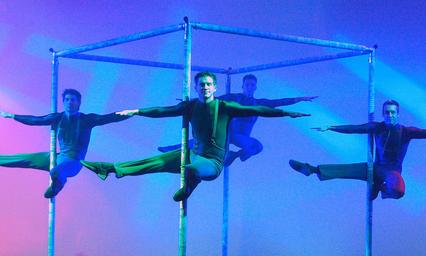 The cube act is an original creation of Steve Gale. The cube act is free from external rigging to make a clients show move smoothly through transitions. The cube has an outside dimension of 8’ x 8’ x 8’ giving a huge presence as it's manipulated around the entire stage. While weighing only 85 pounds it is easily moved on and off stage. In recent years Cirque Du Soleil has adopted this act into their corporate entertainment department. Please have a look at 'Cube Act' or 'Pole Act' to see the videos and photographs of the cube or poles in action.​